According to Barna, 67% of Christians struggle with doubt[1. Barna, https://www.barna.com/research/two-thirds-christians-face-doubt/ (accessed 9/26/2017)]. “Over 33% of young adults said they feel like they can’t ask life’s most pressing questions in church and 23% said they had “significant intellectual doubts” about their faith.” [2. You Lost Me: Why Young Christians Are Leaving Church . . . and Rethinking Faith, http://amzn.to/2xJFP21 (accessed 9/26/2017)]. Multiple independent surveys show that a large number of Christian youth falling away from their faith. This mass exodus appears to, at least in part, correlate with young adults entering their college life. Kids leave home and enter the world where their beliefs are going to be challenged at every step. An increasingly hostile world is imposing itself on our youth and has a far more dramatic impact on young Christians than most parents.

The Mass Exodus of Christian Youths Leaving the Church 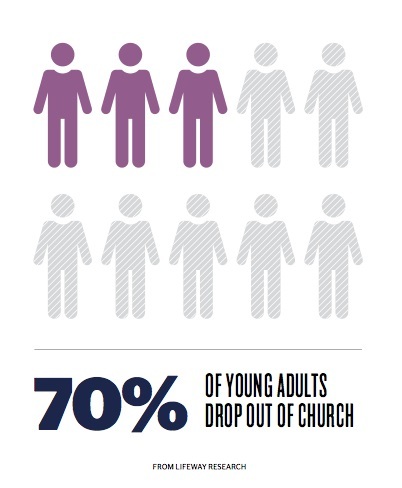 “63% of teenaged Christians don’t believe that Jesus is the Son of the one true God. 51% don’t believe that Jesus rose from the dead. 68% don’t believe that the Holy Spirit is a real entity. Only 33% of churched youth have said that the church will play a part in their lives when they leave home.” [4. The Last Christian Generation, http://amzn.to/2y6u2vG (accessed 9/26/2017)]. “About 50% [of the 78% who self-identified as religious “nones”] said a “lack of belief led them to move away from religion. This includes many respondents who mention ‘science’ as the reason they do not believe in religious teachings, including one who said ‘I’m a scientist now, and I don’t believe in miracles.’ Others reference ‘common sense,’ ‘logic’ or a ‘lack of evidence’ – or simply say they do not believe in God.”” [4. Choosing a New Church or House of Worship, http://www.pewforum.org/2016/08/23/choosing-a-new-church-or-house-of-worship/ (accessed 9/26/2017)]. Many other studies paint a grim reality of the fading of Christian values and beliefs and an increasingly more secular West.

The World Has Always Been the World

If you’re a Christian parent, this is all extremely unsettling. But we must come to terms with the fact that the world has always been the world. Christians have seen opposition in various forms throughout the ages. The 21st century has seen the world find its weapons in the perceived intellectual prowess of secularism.

Youths Leaving the Church: How has the Church Helped?

For the most part, the church has not helped itself. It has, instead, hurt itself by locking itself from the outside world, failing to engage the culture, failing to adequately correct culture, and most importantly failing to equip Christians for intellectual battles, most importantly those being waged on the front lines of college campuses. What have we done to equip our kids? How have we prepared them for this war of worldviews?

As Christians, it is obvious that our primary resource is the Bible – the source of our comfort, inspiration, relationship with the Lord, wisdom and much more. However, the world doesn’t take the Bible seriously, and its intellectual weapons are compelling enough to make most of our youth to reconsider their faith.

What Are We To Do About Christian Youths Leaving the Church?

What should we do about Christian youths leaving the church? One of the best ways in which to equip our young believers is through discipleship – helping them grow in their faith. And while much of that effort tends to help in our pursuit as it relates to matters within the church, once kids leave home and likely leave the church, much of what they’ve been taught stays behind. Beliefs instilled merely within a community tend to remain inside that community and are not necessarily applicable outside, especially when they are regularly challenged outside.

The foundational questions, those that kids are afraid to ask within the church, never go away. Why should we trust the Bible? If evolution is settled fact, doesn’t that disprove the teachings of the Bible? How can we trust the writings of the very few individuals who wrote things so much later after the events they’re describing had occurred who at times, even contradict each other? Has science buried God? The climate of Christianity in the 21st century is far removed from the intellectually robust milieu of previous centuries, those in which history witnessed Christians not only participating in the professional arenas of the academy but forging scientific breakthroughs in multiple disciplines.

It’s extremely important that the discipleship of our youth include apologetics – the well-reasoned defense of the Christian worldview. Apologetics helps equip our youth to be able to have reasons for their faith and be able to not only demonstrate the truth of Christianity to others but to also strengthen their own faith into a stronghold unshakeable by the culture that is more and more determined to topple the biblical worldview.

There are many within Christian circles who disparage the use of apologetics claiming that there need not be any external reasons for our faith in Christ; that the Holy Spirit will win the hearts of those who will respond to the call; that God doesn’t need anyone to defend Him. While certainly true that God can and does accomplish His act of redemption, it’s also true that more often than not God works His ends through people. As such, the gifts that He has given us, our talent, our treasure and our time, are all working out for the good of those who love Him. And if the ability to preserve the faith of our youth while at the same time equipping ourselves to be more effective witnesses is within our grasp, would it not be disobedient to the Lord to decry those endeavors?
Furthermore, apologetics is not only permitted in the Bible; it’s actually commanded. Here’s what the apostle Peter said (1 Peter 3:15):

in your hearts honor Christ the Lord as holy, always being prepared to make a defense to anyone who asks you for a reason for the hope that is in you; yet do it with gentleness and respect,

Therefore take up the whole armor of God, that you may be able to withstand in the evil day, and having done all, to stand firm. Stand therefore, having fastened on the belt of truth, and having put on the breastplate of righteousness, and, as shoes for your feet, having put on the readiness given by the gospel of peace. In all circumstances take up the shield of faith, with which you can extinguish all the flaming darts of the evil one; 17 and take the helmet of salvation, and the sword of the Spirit, which is the word of God, praying at all times in the Spirit, with all prayer and supplication.

Now while Paul was waiting for them at Athens, his spirit was provoked within him as he saw that the city was full of idols. So he reasoned in the synagogue with the Jews and the devout persons, and in the marketplace every day with those who happened to be there. Some of the Epicurean and Stoic philosophers also conversed with him. And some said, “What does this babbler wish to say?” Others said, “He seems to be a preacher of foreign divinities”—because he was preaching Jesus and the resurrection. And they took him and brought him to the Areopagus, saying, “May we know what this new teaching is that you are presenting? For you bring some strange things to our ears. We wish to know therefore what these things mean.” Now all the Athenians and the foreigners who lived there would spend their time in nothing except telling or hearing something new.

Here Paul, speaking to philosophers, did not merely speak of the things he witnessed, but tried to demonstrate the truth of Christ through a reasoned defense. There is nothing unbiblical about apologetics. If all truth is God’s truth, then coming to a more intimate realization of those truths is not a heresy, but a responsibility. If God is real, then we have nothing to worry about – the internal convictions of our youths will eventually align correctly with the world as they gain a deeper understanding, and only parents and those in leadership positions in churches can help bring about this change. The Christian life is not one lived merely on the precipice of faith, but a foundational bedrock of reason and evidence.